More than 800 rallies were held around the world on July 12, mostly in the U.S., demanding that the Trump regime shut down their immigrant detention camps – labeled by many critics as concentration camps.

The “Lights for Liberty” global action, organized by national, regional and local groups, called on Americans to uphold human rights and the fundamental principle behind democracy that all human beings have a right to life, liberty and dignity. Thousands gathered on July 12 to protest the inhumane conditions and denial of basic needs – such as adequate food, water, and sanitation – faced by refugees in detention camps on the U.S./Mexico border and elsewhere across the country.

Hundreds of people attended a rally in Hamden, Connecticut, near New Haven, which is home to many undocumented residents. The action was organized by staff members at the Yale University Child Study Center, which has a long history of treating children who have experienced trauma. We hear from one of the speakers, Megan Goslin, a clinical psychologist who works in the Center’s Childhood Violent Trauma Section. Here, she describes the short-term and long-term health impacts of toxic stress on children torn away from their parents, and the urgent need to end family separation and close down the detention centers.

MEGAN GOSLIN: And so we rallied and we called and we said, “Families belong together.” And that is certainly true. But immigrant rights groups were urgently warning everyone, “Don’t make the messaging so narrow.” They were reminding us that incarcerating children with or without their parents is a violation of their fundamental human rights. And so here we are today, watching in horror as our country, in our name, both keeps children from their caregivers and locks men, women and children in conditions that lack basic fundamental necessities, like adequate food, water, soap, toothbrushes and beds.

I’ve been asked to arm us very briefly with the science behind traumatic family separation and detention, and the reality is that the science tells us what I feel to be true as an activist. In fact, each of you already instinctively knows the science. You already know it in your hearts and in the pit of your stomachs without needing to hear about the decades of research. You know it when your eyes well up as you imagine a breast-feeding baby being ripped from his mother’s arms. You know it when you feel overwhelmed by rage as you picture a 5-year-old child being asked to take on the responsibility of diapering, feeding and comforting an inconsolable 2-year-old. You know it when your heart aches at the idea of a 4-year-old who’s wondering whether her mom and dad don’t want her anymore; maybe that’s why they haven’t come to get her. You know it as you imagine a father sick with worry tonight, because he doesn’t know if his son is hungry, if he’s scared, if he’s hurt; he doesn’t know who’s taking care of him. And more than anything, he just longs to be able to hold his son and tell him everything is going to be okay.

And you already know this science because your body instinctively responds to these images with disgust, with outrage and with great, great sadness. Many years ago, in our country, we made a decision as a society to put an end to orphanages as a strategy for caregiving with kids who don’t have parents or guardians. We made that decision for both moral and scientific reasons because we know that children in groupcare settings do not thrive, particularly young children. In fact, early and pervasive stressors, like childhood detention, can contribute to both structural and functional changes in the brain. They can lead to fundamental alterations and dysregulation in the way our bodies respond to future stress. And when left untreated, these changes can last a lifetime, with devastating consequences for health, development and well-being.

So what do these children need to recover? First and foremost, they need the danger to end. So in this case that means the immediate release from detention and reunification with caregivers. Because in times of the very worst stress, children use their parents as a buffer against what’s happening around them. So by keeping children in conditions of toxic stress without access to their lifelines, their caregivers, we are inflicting double the damage. We are withholding the very medicine they need to begin to heal, and that (experience) can never be safe and that can never be sanitary.

That is why scientific medical research and human rights organizations across the globe have warned of the traumatic and moral implications of family separation and detention. And for those of us in the medical and scientific communities, I think we need to raise our voices even louder, and I think we need to be unrelenting.

So I want to leave you tonight with a request. We could just show up at rallies and think that our job is done. And if we do that, we certainly have failed. Instead, we need to partner in a sustained and meaningful way with immigrants rights groups, who are busy doing this work every single day, whether immigration is on the front page or not.

And we need to provide access to early intervention for those reunited families to support the kids and the adults in their recovery from these traumas. We need to do all this, and we need to do it more and we need to do it yesterday. And most importantly, we cannot allow this administration to weaponize parental love in an effort to deter desperate families from taking desperate measures in search of a better life. Instead, we need to weaponize our love, our compassion and our empathy for our fellow human beings. So I ask you, gather up your love and demand that the traumas of family separation end now. (applause)

For more information visit Lights for Liberty at lightsforliberty.org. 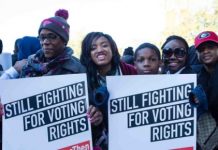 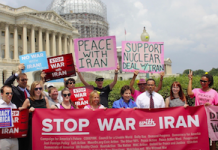 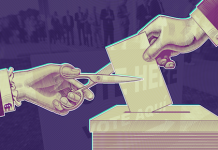