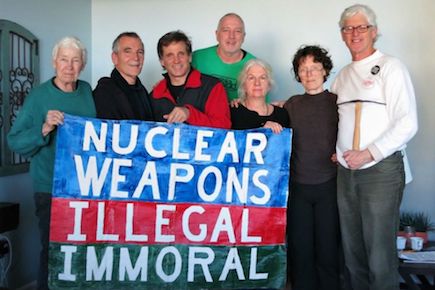 [Producers’ update on Oct. 24, 2019: A jury in Georgia has found seven Catholic peace activists — known as the Kings Bay Plowshares 7 — guilty of all charges related to a nonviolent protest at a nuclear submarine base last year. Judge Lisa Godbey Wood, who tried the case, told defendants after the verdict was announced, they have 14 days to file a motion for a new trial, acquittal or any other motion they see fit.]

On April 4, 2018, in commemoration of the assassination of the Rev. Martin Luther King, Jr. – seven radical Catholic activists gained entry to the largest nuclear weapons naval base in the world, in Kings Bay, Georgia. The group hammered and poured blood on the weapons in the manner that has distinguished such nonviolent direct actions since the first Plowshares action in 1980.

There have been at least 75 Plowshares actions since, which works out to almost two per year over the past 40 years. The trial of the Kings Bay Plowshares defendants began in Georgia on Oct. 21.

Between The Lines’ Melinda Tuhus spoke with Plowshares defendant Mark Colville, who lives in New Haven, Connecticut, when he was out of jail briefly before heading back to Georgia for his trial. Colville participated in a previous Plowshares action in 1997 at the Bath Iron Works submarine base in Maine, and spent almost a year in prison. Here, he explains the novel defense the seven are planning. Colville also calls for a re-evaluation of the necessity defense, which has been almost universally disallowed by U.S. judges. It calls for acquittal based on defendants taking an action deemed illegal in order to avoid a worse outcome – in this case, illegally entering the military base to avoid the worse outcome of the building and possible use of nuclear weapons. The Plowshares defendants face up to 20 years in prison if convicted on all four counts.

MARK COLVILLE: We were trying to let the court know ahead of time that we’re trying to use this defense based on the Religious Freedom Restoration Act. It’s a little complicated but the basic point is that the Religious Freedom Restoration Act a law that is meant to solidify and enhance the freedom of religion that’s found in our Constitution. It says some specific things about people’s religious practice, mainly that the government should only intervene in the religious practice of people with sincerely held beliefs when it’s necessary and when the government has a compelling interest to do so, and that when they do intervene they must do so in the least restrictive way that is available to them.

So, we took up this law because, from the beginning, we identified what we did at the base as “sacramental and prophetic action,” which is basically symbolic action that is trying to call into reality a basic principle of faith, which is peace and disarmament, to make that real in the world today. So we took up symbols and we went to a place which we identified as a place of sin, because it’s a place where killing is being prepared.

And so we had to be at that place and we had to address the sin, particularly because the weapons are built for the express purpose of our protection. So that causes a crisis of faith for us as Christians and so we felt the need to respond. From the beginning we’ve been saying this is a religious action, not a political action.

We’ve been prosecuted politically – really to the full extent of the law. They’ve gone overboard in charging us with three felonies and a misdemeanor. So, we’ve attempted to use the Religious Freedom Restoration Act as a way of saying, first of all, that the interest of the government in defending these weapons is not a compelling interest because the weapons themselves are a crime. They’re illegal, according to our own laws.

BETWEEN THE LINES: How are they illegal?

MARK COLVILLE: International law that we enter into by congressionally-approved ratified treaty becomes binding in superceding law in all courts in the U.S. And nuclear weapons were declared illegal by the World Court in 1996. We [the U.S.] have several judges on the World Court and it’s a body that we are subject to. So the weapons are illegal and therefore the government’s interest in protecting them is not compelling interest; they should be disarmed.

And then of course we’re talking about the least restrictive means of intervening. As one of my friends said, if they really were interested in the least restrictive means they could simply build a fence that a bunch of old people can’t get through [laughs]. I’m almost 60 years old and I’m the youngest one in the group of seven, and yet they went and charged us with three felonies and a misdemeanor.

Our contention was that according to the Religious Freedom Restoration Act, they didn’t have any business charging us criminally. There were a whole bunch of other options available to them to resolve this and they chose none of those. They chose a political prosecution.

Ultimately, the judge has now denied us the opportunity to make that defense before a jury, but it’s still not clear whether that forbids us from mentioning or alluding to our faith. In large part what this trial is going to be about is not fact, because in large part, the facts of the case are not in dispute. What they mean is what’s in dispute – and of course we’re contending – that the criminality is being engaged in by the government and the military and that people have a right and responsibility to call out that crime and to call for its prosecution. That’s what we say our action means.

The Bulletin of Atomic Scientists says that we’re closer to nuclear war now than we’ve ever been, at least going back to the Cuban missile crisis. They’ve actually moved the clock up.

And then, of course, a large part of what we’re saying is that a necessity defense needs to be given another look because of the mental health of the president, the perpetual crisis that’s going on in the White House, the total instability of our government coming from the executive branch right now, is really scary when you think about these weapons being under the control of the president. 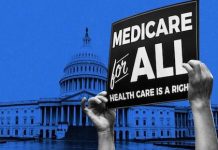 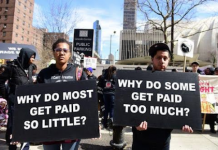 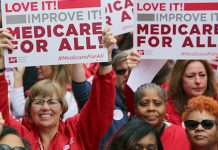 Contrary to GOP Talking Points, Medicare for All Will Reduce Costs for All