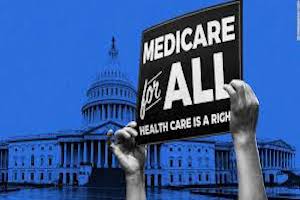 The Democratic party-controlled House of Representatives took its first historic step on April 30 to begin a national debate on the popular proposal to establish a Medicare for All universal health care system in the United States. The hearing before the House Rules Committee focused on a bill recently introduced by Rep. Pramila Jayapal, D-Washington, the Medicare for All Act of 2019, that would cover all American’s health care needs, and transition the nation to the program over the course of two years.
One of the most impassioned speakers supporting for Medicare-for-All at the hearing was Ady Barkan, a veteran healthcare activist who suffers from the degenerative neural disease ALS, who used a computer to assist him to address the legislators.
Between The Lines’ Scott Harris spoke with Wendell Potter. a former health insurance industry executive turned whistleblower and author. Here, he examines what the nation’s insurance industry will be saying and doing to stop the momentum of the popular movement supporting a transition to a universal, single-payer health care system in the U.S. such as Medicare for All.

WENDELL POTTER: Well, it was a very, very historic hearing in that there never had been a hearing ever before in Congress on moving to a Medicare for All type of healthcare system. In fact, just 10 years ago, during the debate on what became the Affordable Care Act or Obamacare as most people call it, no one from any single-payer organization was even given any serious consideration. And in fact, at one point during a hearing at the Senate Finance Committee, some supporters for single-payer health care were actually ejected from the the hearing room and arrested because they were raising a ruckus, primarily because no one was paying attention to the efforts to try to move us to a Medicare for All type of healthcare system. Things have changed so much in those 10 years. More people are realizing that the Affordable Care Act, even though it did significant good, doesn’t go nearly far enough to get us closer to universal coverage or control health care costs.

BETWEEN THE LINES: Wendell, on the insurance industry side, they are making claims that Medicare for All will drive taxes higher, that Americans will have less choice, longer waiting times for doctors and operations, lower quality and there’ll be rationing of care. And of course, there are single-payer universal healthcare systems all across the developed world. In fact, the United States is the only country not to have a universal system. But tell us a bit about how you as an insurance industry insider responds to these arguments, which are I think really the boiler plate of how the insurance companies are going to try to derail efforts to move Medicare for All forward?

WENDELL POTTER: Well, they’re using the same tactics they’ve used for decades to push back against any kind of reform that the industry doesn’t like and that the industry feels might threaten profits because at the end of the day, it’s all for them about profits, about making money for shareholders. So they engage in what I’ve often referred to and what we refer to in the PR (public relations) business as FUD – Fear, Uncertainty and Doubt. And all of these campaigns are based on lies and half-truths. And, that’s one of the things I write a great deal about. It’s to help people understand that this is just all made up stuff.

Let’s take them one by one. Yes, we’re talking about a system that will be publicly financed, but privately delivered. And of course you have taxpayers who would provide the funding for that. But what they obscure, what they don’t tell you is that the money will come from shifting premiums, money we pay in the private insurance companies, into a single fund that will be administered much more efficiently.

Let’s talk about rationing. We have the most insidious form of rationing in the developed world. We ration on the ability to pay. And, let’s talk also about the choice issue. They maintain that this would take away choice. That is obscuring the reality of the current system in which insurance companies or employers are limiting our choices. It’s not choice of health insurance plans that Americans are interested in. They want to have choice of doctors and hospitals. And increasingly, insurance companies are limiting your choices through these narrow networks that are features of almost all the health plans we have these days. So in other words, they seek to mislead and obscure and they lie. Plain and simple.

BETWEEN THE LINES: Wendell Potter, are you optimistic that public pressure and aggressive legislators can move the ball forward on Medicare for All or do you think with all their money and all their influence, the insurance industry will win this fight?

WENDELL POTTER: I’m optimistic and if I didn’t think that it was winnable, I wouldn’t be in this fight myself. I think it’s not a matter of if, it’s a matter of when we have a Medicare for All type of health care system because the current system is failing more and more of us every year. We’re seeing that our employer-based system is crumbling and it’s just a matter of time before it collapses. 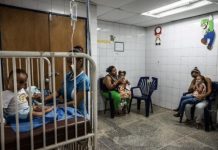 This Week’s Under-reported News Summary May 8, 2019 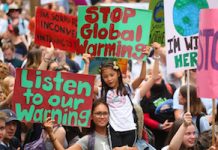 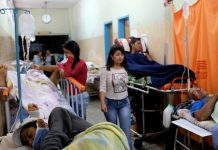