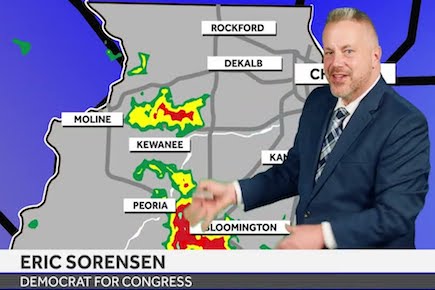 Eric Sorensen was a TV meteorologist for 22 years in his hometown of Rockford, Illinois, when the Democratic congresswoman in Illinois District 17, Cheri Bustos, announced her retirement after 10 years in office. Voters there picked Donald Trump twice for president, making it a textbook example of a swing district.

Sorensen then Eric Sorensen, a retired TV meteorologist, now an Illinois congressional candidate, who talks about his campaign’s emphasis on addressing the climate crisis.decided to retire from his TV weatherman job and run for the now open seat, emphasizing his role as a climate science communicator.  A week before the June 28 primary, when our interview was conducted, Sorensen was 7 points ahead of his nearest Democratic competitor in a field of 6 candidates.

Meanwhile, Esther Joy King, an Army judge advocate general officer and Trump supporter Charlie Helmick are vying for the District’s Republican nomination. Between The Lines’ Melinda Tuhus spoke with Sorensen about his decision to run for Congress and how he’s approaching the issue of climate change in his campaign.

(The following interview transcript may not reflect the audio recording, which has been edited for broadcast time constraints.)

ERIC SORENSEN: I took that risk, 15 years ago now, of talking about climate change on TV when no one else was. And I did it because, to be quite honest, there was not much climate in the curriculum for the atmospheric science degree. But, here was the thing: I learned about it. It was up to me as the meteorologist to learn and as I learned, I was compelled to tell the story to the viewers because we were getting the tornadoes in January. We were getting the 500-year floods to happen year after year.

And so, I was just connecting people with what they were seeing out their window to this big thing about climate change that people thought was just the polar bear. And I was connecting it to local events and to be able to say, especially in an agricultural area, that your livelihood depends on how we react to this.

And I heard back from conservatives and progressives who both said the same thing: “Thanks, Eric, for talking about this, for keeping your opinion and the politics out, but you’re focused on the science, and we trust you for the science.” And that’s the key right there.

And so, after all of this time working for 20 years in this district, when my congresswoman said she was retiring, I thought, “Here we are, hopefully at the tail end of a pandemic, in a world where we need more science and better science communication, it needs to happen right here in my home.” And that’s why I’m running for Congress.

MELINDA TUHUS: I have heard, and I don’t even know who’s behind it, that there’s some effort to try to get meteorologists to talk about climate. It’s like some organized thing. Do you know anything about that?

ERIC SORENSEN: Yes. I was one of the very first meteorologists to be part of the program. It was called Climate Matters in the Newsroom; now it’s Climate Central. And I believe there are now 700 meteorologists in the country that focus on – and whether it’s within the broadcast or online – it’s localized to people’s geographical areas. And that was one of the things that early on, we meteorologists said the way we were going to connect people with meteorology was going to be through what people were seeing out their windows, which is what I did from the beginning. So, it is very successful. Yale has had a big influence on making sure we have the communication and have the ability for this program to succeed. But now Climate Central just announced that they’re teaming up with the Weather Channel to produce more climate change and sustainability stories.

ERIC SORENSEN: Well certainly, front and center today is inflation. That’s the elephant that’s in the room and we have to make sure that our government is working to solve these problems, and it’s much like climate change – there’s no silver bullet.

But when I talk with people here in this district, we can have and we do have really great conversations about climate, you know, especially in the agricultural community. When I was getting my petitions signed to even get on the ballot, I was in one of the smaller towns in western Illinois – Kewaunee – a gentleman and his wife were coming up to me, and I said, “Hi, I’m Eric Sorensen, the weather guy from Channel 8. I’m now running for Congress. Would you sign my petition?”

And I said, “Well, you’ve gotta see how the climate is changing where you are, where we get four or five inches of rain in an hour out of a storm in the summertime, but then it doesn’t rain for 20 days, and that affects your livelihood, because you’re having to juggle drought and flash flood.”

And he said, “Yeah, absolutely, there’s no way you can deny this anymore, but Eric, I just don’t know what we’re supposed to do about it.”

And that’s when I said, “Well, that should be my job. My job will be to go to Congress, be the first meteorologist in nearly 50 years, and find some of the solutions. I believe instead of a silver bullet for climate change, there’s just silver buckshot. There are so many decisions that need to be made. I want to be able to help you make that decision and I want to be able to come back to your farm and talk to my Republican friend about the solutions.”

MELINDA TUHUS: If the Republicans control, say, even just the House, how do you think you could be effective with a climate message when they’re just still in denial?

ERIC SORENSEN: My role will be to be the communicator and the marketer that we’ve needed with respect to climate for a long time. 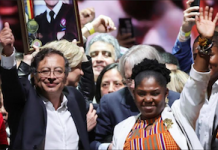 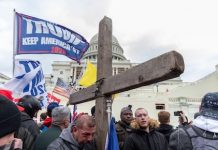