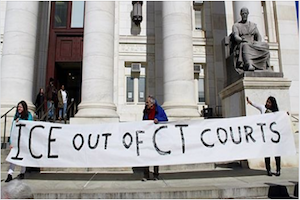 Immigrant rights advocates protested outside the Connecticut Judicial Branch in Hartford on  March 9, demanding that ICE – the federal Immigration and Customs Enforcement officers – stop arresting undocumented immigrants inside the state’s courthouses. Activists point out that neighboring states of Massachusetts and New York have prohibited ICE arrests in their courts.

Maintaining that the state’s courts are serving as stalking ground for ICE agents, protesters made several demands on the office of state court administration. The Immigrant Bail Fund reports that bonding out immigrants who have been arrested in court is the most common avenue by which they learn about arrests. And the Immigrant Defense Project reports that in New York City, arrests within courthouses has soared 1100 percent since Donald Trump became president, up from much  smaller numbers under President Obama.

Between The Lines’ Melinda Tuhus was at the Hartford rally and brings us some voices at the protest action. We hear first from Ana Maria Rivera-Forastieri, co-director of the Connecticut Bail Fund, who focuses on the immigrant side. She is followed by Josh Michtom, a Working Families Party member who serves on the Hartford City Council, who spoke to the protesters gathered on the street.

ANA MARIA RIVERA-FORESTIERI: We have several demands. One of them is that the judicial branch has the full authority to enact a policy that prevents them from coming in, and there are several states that have done that, including our neighbors in New York and Massachusetts. So they could institute a policy today saying Immigration is not allowed to come in and arrest people unless they have a warrant, which is what they require of any other law enforcement agency. So we’re saying, “No special treatment for ICE.”

In addition to that we’re saying reparations for families that have been impacted by this issue. And we’re also very worried because of the Trust Act now, the Department of Homeland Security has subpoenaed several states for information about people they didn’t release because of Trust Act policies, and so the state of Connecticut is considering whether or not they’re going to respond to these subpoenas, which run contrary to the spirit of the Trust Act and why we did it in the first place. I mean, if they honor these subpoenas, then what is the point of the law, which we worked so hard to pass?

MELINDA TUHUS: When the enhanced Trust Act was passed, I thought I read that it was the strongest or second strongest in the country. So, in terms of this kind of operation, of ICE agents going into courthouses, are there other states around the country where they mostly can go in? You said New York and Massachusetts have said “No?”

ANA MARIA RIVERA-FORESTIERI: Yeah, there are several states that are considering litigation against Immigration. The state of Massachusetts already filed a lawsuit in federal court – and won – so they’re preventing ICE from coming in. Washington state is considering the same. So we’re really saying that Connecticut needs to step up. We passed the Trust Act, but it’s not enough.

CHANT: No fear, no hate, no ICE in my state!

ALOK BHATT (Connecticut Immigrant Rights Alliance): So, as we are continuing to struggle against our state’s judicial branch to make sure that they’re stepping up to make sure that all Connecticut residents are safe to step inside courthouses. We do have allies, and that’s why it’s so important to organize on a local level both in your communities and working within your municipal bodies to make sure that your town and city are also taking steps to protect all of their residents. So with that we want to bring up to speak with y’all, someone who’s been fighting for us in the City of Hartford: Josh Michdem, for city council, Working Families [Party]. (Applause)

JOSH MICHDEM: How we doin’? My name is Josh Michdem. I’ve only been councilman for two months, but I learned real quickly that, you know, I came in with a lot of passion, but there’s a lot of gray areas, and a lot of compromise. But this issue, the way the federal government treats the members of our community who are undocumented is not a close question, it is not a gray area. This is a clear right and wrong situation. And so that’s what I’m here to say: I’m not here for compromise. I’m not here to just try to find the little ways to slowly slow down ICE in our courthouses or on our streets or anywhere else. Because this is an evil so monstrous – the way the federal government treats our people – that we can only respond with pure fight, by using all of our strength and all of our resources, to push back. That, to me, is what it means to be a sanctuary state. We can’t choose our battles; we have to fight all the battles for all of our people. A real just, true sanctuary state provides things for all its people no matter where they were born or how they got here. Schools, housing and justice – access to the courts to vindicate their other rights. So we’re not a real sanctuary state yet. We’re not doing it. We’re not stepping up. We know there was a marshal who did try to stop ICE, who slowed them down and saved someone – one of us, a member of our community – and he got fired.

At the same time, we know that lots and lots of marshals have been helping ICE, like my brothers and sisters said, and they’ve gotten no consequences. By the same token, as was mentioned, we know some states have rejected the subpoenas, have taken a strong stance, and so far, Connecticut hasn’t done that. So, I’m here to demand that – to demand real sanctuary status, real justice, real protection for every single one of us. And in the meantime, what I’m here to promise, is that all of us, both on City Council, everyone in the community, we will be out here fighting. We’ll be in the courts, we’ll be in the streets, we’ll be everywhere we can be, to stop ICE from getting at our people. That’s pretty much all I got. [Applause]

For more information on the Connecticut Immigration Rights Alliance on Facebook, visit
Facebook.com/CTImmigrantRightsAlliance. 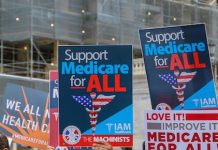 Julian Assange Battles Extradition to the U.S. in a Case That Threatens Press Freedom 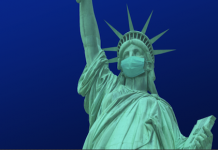 Single-Payer System Would Be More Effective in Managing Pandemics