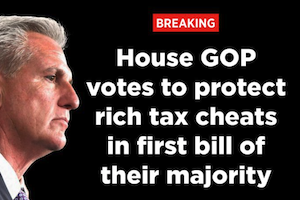 In their first vote on legislation after taking control of the House of Representatives, Republicans voted to cut $72 billion of $80 billion in funding for the IRS, a key element in the Inflation Reduction Act passed by Democrats in August. The money was allocated to hire 87,000 new IRS employees and modernize the agency’s antiquated technology systems. New staffing and technology upgrades are expected to generate $180 billion in new federal revenue over the next 10 years by cracking down on millionaires, billionaires, and corporations who dodge paying hundreds of billions of dollars owed in taxes annually.

Because the GOP repeal bill doesn’t have support in the Democratic-controlled Senate, and the White House opposes the measure, the vote only served to amplify Republican’s false claims that Democrats were creating a “shadow army” of 87,000 IRS agents armed with assault rifles to show up on middle-class Americans’ doorsteps to audit their taxes.

Between The Lines’ Scott Harris spoke with Will Rice, policy consultant with Americans for Tax Fairness, who talks about the motive behind the Republicans’ vote to repeal funding for the IRS that if signed into law would protect the GOP’s wealthy donors and tax cheats.

WILL RICE: The IRS has had its budget and staffing cut for many, many years now. Its budget is actually 20 percent or a fifth less now than it was in 2010. Similarly, has a fifth fewer employees and there have been even steeper cuts in enforcement, staff and revenue agents. This has been done under the Republican Congress because their ideology is that they don’t believe in us raising revenue that we need to fulfill public purposes.

And so they attack the IRS. And the predictable result of all these cuts has been that audits are down by more than half between 2010 and 2019. And for millionaires, it’s dropped almost by almost three-quarters. It used to be that if you earned over $1,000,000 a year, you were 6 times more likely to be audited than the low-income family who received the earned income tax credit.

By 2018, you’re only twice as likely to be audited. And so the reason that this is so important is that the wealthiest members of our society are, by one estimate, evading, illegally evading $160 billion with a B of taxes every year, and that’s $160 billion in taxes that they legally owe but have not paid. And that’s money that could be used to provide universal pre-K, to expand health care, to improve housing, to do innumerable useful things for our society.

And so this is a very it’s a very important point to realize that this is not about being artful in your tax preparation and pressing a point or being aggressive. This is just not paying what you owe. And the IRS has been helpless, essentially, to police this lawlessness because they’ve had their budget cut so much. And so what the Democrats did last August, together with President Biden, was to beef up the IRS budget, as you say, re-fund it so that they can go after rich and corporate tax cheats.

And an estimate was that they would spend $80 billion. Would they raise an additional $200 billion so there would be an actual revenue increase of $120 billion. The IRS is one of those few areas of the federal government where you actually make money by spending more money.

So the Republicans distorted this in their public statements and in millions and millions of dollars of ads at the midterm elections as an army of auditors were going to be unleashed on middle-class taxpayers. Well, that was never true and every fact-checking organization in America found it to not be true. But nevertheless, that’s the story they’re sticking to.

And so they didn’t actually de-fund all of it. To be fair, they cut 9 out of $10. So 90 percent of it. They left a little bit. But the things they cut were the key amounts needed to improve tax enforcement, specifically enforcement of the tax laws on complex returns, such as rich people tend to have, as exemplified most recently by President Trump’s tax returns.

SCOTT HARRIS: Will, can you speak about the link between the wealthiest Republican donors and this effort to attack the IRS and to paint them as an army of thugs that are gearing up to bash down the doors of working families to take their television sets and their gas stoves or whatever else is part of the conspiracy theory of the week?

WILL RICE: Well, a letter written by and signed by former IRS commissioners from both parties noted that this increased funding that would allow the IRS to go after richer taxpayers and corporations would actually be a boon to middle-class taxpayers. Because right now with their diminished capacity, the IRS can really only go after people who don’t have an army of accountants and lawyers to try to delay and defeat them.

So they kind of go after low-hanging fruit. But the real money is in these very wealthy tax returns. And those a lot of those people are big donors to the Republican party. So it’s hard not to draw the conclusion that the Republican party is trying to revoke this restoration of strength of the IRS as a payoff to their donors.

I mean, most people pay the taxes they owe partly because they’re honest, but also because every dime they make is a part of the IRS anyway. That’s very different if you’re a rich business owner, say, because your sales are not automatically reported to the IRS and your expenses are not automatically reported to the IRS. So there’s a lot of funny business that can go on there.

The same way with investors. So some of those sales are reported, but not how much you pay for the things originally, usually. So it’s kind of an honor system among the very wealthy with the kind of income they have, as opposed to people who draw a paycheck where it’s all down and reported. So the IRS needs to keep closer tabs on the people who are just relied upon to honestly report how much money they’ve made, how much they’ve had in expenses, and how much money they owe in tax.

That’s what this funding will allow them to do better.

Find more information at Americans for Tax Fairness at americansfortaxfairness.org.

Listen to Scott Harris’ in-depth interview with Will Rice (15:37) and see more articles and opinion pieces in the Related Links section of this page. 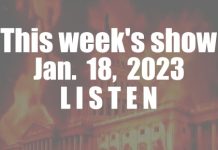 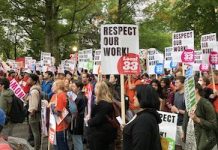 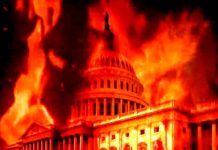 GOP Extremists are Burning Down the House