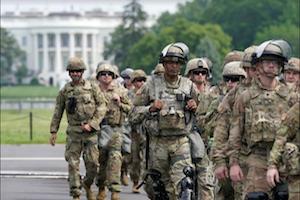 After the May 25 police murder of George Floyd in Minneapolis, the nation erupted in protest and social unrest. While most street protests were peaceful, property destruction, arson and looting occurred in some cities. At one point early in the nationwide protests, President Trump called for the deployment of 10,000 military troops to Washington, D.C. While those troops weren’t deployed, National Guard and other armed federal law enforcement forces were mobilized and dispatched to the capital. At the same time, Trump threatened to invoke the 1807 Insurrection Act to deploy active-duty troops to American cities if state governments refused to activate their National Guard.

But most Republican legislators supported the president’s threat to use military force, and his order to clear Washington, D.C.’s Lafayette Square of peaceful protesters with tear gas and rubber bullets. Arkansas GOP Sen. Tom Cotton spoke for many Republicans when he wrote his heavily criticized New York Times op-ed titled, “Send in the Troops.”  Between The Lines’ Scott Harris spoke with Cas Mudde, Stanley Wade Shelton UGAF Professor of International Affairs, at the University of Georgia’s School of Public and International Affairs. Here, Mudde assesses growing concern about the Trump regime and Republican party support for an authoritarian and militarized response to nonviolent nationwide protests.

CAS MUDDE: I think we saw three different things. We saw Trump asserting what he thinks is domination, which shows his clearly authoritarian tendencies, which he has always had. He sees everything as a law and order issue where you just have to in a sense, hit harder. And we also see his clearly undemocratic instincts, which is in part probably because he knows very little about the Constitution. And so for him, it is dominance, which means if the police can do it, you get the military probably barely knowing that you don’t use the military against your own forces.

The other thing that you see is a pushback from the military itself, which is encouraging. And while this was predominantly done from by former military, this seems to be also broadly shared among the top of the current military. And then, you see a third element, which is again, very disturbing – that is a whole range of forces being deployed in D.C. which are not military, but which are partly National Guard and partly alternative other troops that are part of this vast network of law enforcement, which seem to be kind of under the control of (William) Barr, the attorney general, who are deployed without, at times, insignia. Not clear who they are. And I think that’s a very worrying sign for anyone who studies authoritarianism.

SCOTT HARRIS: One other aspect of the violence we’ve seen from police in how they’re dealing with demonstrations across the country in the last two weeks is that there have been a very important number of attacks from police directly on journalists and TV camera crews. And this has been well-documented. Some of these attacks have taken place on live TV. One famous incident involved an Australian news crew that were attacked by police in Lafayette Square during the sweep there. And that was broadcast live back to Australia. This seems to be a feature of the crackdown that we’ve seen these last couple of weeks where journalists themselves are being targeted. What does this tell us about police and their leadership?

CAS MUDDE: Of course, again, it isn’t new. We saw it in Ferguson, but we saw it. It was much more limited and localized. Now we actually see it pretty much across the country. It’s difficult not to tie it into pretty much four years of relentless attacks on the media as being biased, being left-wing, being anti-American. But I think what it tells us is that this is not clearly just a few bad apples. This is not localized in the heat of the moment as it was in Ferguson. And it is worrying that in this sense, there are very few high police chiefs who have spoken up very clearly against it. Most of them have either denied it or minimized it. And in this sense, we hear less encouraging statements from police officers and police chiefs than we hear from the military.

SCOTT HARRIS: Cass, what should be done to effectively push back against the right, the right-wing, the extremist right-wing that has found a home in the Republican party and has slowly been mainstreamed into U.S. politics?

CAS MUDDE: The most effective thing to do is vote Trump out and, the bigger his defeat, the bigger the chance that the Republican party will fundamentally change. The Republican party and the leadership of it is not ideologically devoted to the Trump line. Not to say that Trump has made them supporters of white supremacy or playing the race card or feats like that.

But only about eight years ago, there was a whole debate within the Republican party about becoming more open to multiculturalism, particularly the Hispanic population. In the end, it didn’t go that way. But if Trump is thoroughly defeated and, given the demographic shift, the Republican leadership will understand that the pure white strategy has no future. And so while this doesn’t in any way make the Republican party a tolerant party, that will take some time. I do think that at least at the federal level, it will end this white supremacist strategy. And so I think leaving aside that it will also re-establish liberal democracy, I think the biggest thing that citizens can do at the moment is just come out in force and crush Trump at the polls. Because again, the bigger the defeat, the bigger the signal that this white strategy has no future.

Cas Mudde is also host of the podcast, “RADIKAAL.” His latest book is titled, “The Far Right Today.” 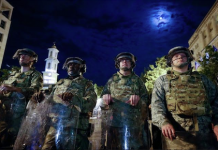 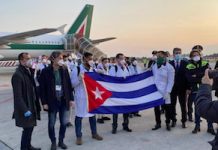 Cuba Contains the Coronavirus Pandemic at Home, Shares Their Knowledge Around the World 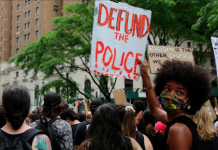