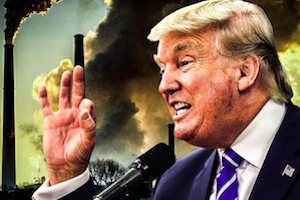 On Jan. 10, the Trump administration released its proposed revisions to the National Environmental Policy Act, or NEPA. Considered the bedrock of U.S. environmental law, the measure ushered in a raft of historic legislation such as the Clean Water Act, Clean Air Act and Endangered Species Act. Spurred on by public outrage over such iconic examples of pollution as the Santa Barbara oil spill and the Cuyahoga River in Cleveland catching fire, both in 1969, Congress passed and President Richard Nixon signed the bill creating NEPA on Jan. 1, 1970.

NEPA is the law that established the requirement that projects such as pipelines, dams, sea walls and more conduct an Environmental Impact Statement (EIS), or the less rigorous Environmental Assessment. Two of the most controversial pipelines and best known projects in recent years that were required to conduct an EIS are the Dakota Access pipeline and the Keystone XL pipeline, which has yet to be built.

Between The Lines’ Melinda Tuhus spoke with Sharon Buccino, senior director, Land Division, Nature Program at the Natural Resources Defense Council. She says it was NEPA that inspired her to pursue a career in environmental law. Here, she explains how the law currently works and what would change if the Trump regime’s revisions are implemented.

SHARON BUCCINO: There are two critical things that these proposed rule changes would do. One is that Trump has proposed to dramatically reduce the number of projects that are covered by NEPA to begin with, that is, to require any kind of review. But the second thing that Trump has proposed is that for those projects that still require some kind of review, his proposal shrinks dramatically what that review has to cover. And that’s where this question of, “Are we going to look at the consequences of where climate change comes in”, because what these rule changes do is they change the definition of effects. What are the impacts? What are the kinds of impacts that the review needs to look at? And the proposal that Trump has made eliminates the word “cumulative” from the definition of effects that need to be addressed.

MELINDA TUHUS: Can you explain in more detail exactly what the Trump administration is proposing to do regarding NEPA?

SHARON BUCCINO: So the Trump administration has proposed changes to the regulations that the Council on Environmental Quality has put in place to implement NEPA. CEQ was actually created by NEPA at the same time and it sits in the White House, but it has the responsibility for working with the various federal agencies in meeting the mandates of NEPA – both the substantive and the procedural mandates of NEPA. So, changing its regulations is fundamental and incredibly significant.

And yes, one of the reasons that the Trump administration argues those changes are needed because of the delay and overbearing nature of the process. I don’t think those arguments are justified by the facts. Most of the projects and those decisions happen very, very quickly. So, one question will be: Have the reasons the Trump administration has given for its changes – are they justified? Can they support them? If they can’t, that’s when the decision is vulnerable in court.

MELINDA TUHUS: So, Sharon Buccino, what happens next?

SHARON BUCCINO: The first step is to participate in this administrative process. So there are a number of groups – and it’s not just environmental groups – that are preparing to make comments. There’s a comment period that runs for 60 days. I think it’s March 10 that it ends. The administration has scheduled a couple of public hearings.

MELINDA TUHUS: Can you say more about the public participation part?

SHARON BUCCINO: When an agency is engaging in an environmental impact statement, there are several steps in that process, where the public has a right to participate and the agency that is conducting and completing that review has to include the public. At the very beginning there’s what’s called “scoping,” and that’s the place to get all the issues on the table. It’s actually the place where the agency, if it invests in that front end, can focus on the issues that really matter to the public and by doing that, can address one of the complaints about pages and pages having to be done to bulletproof something.

Well, if the agency does its job and figures out what issues really matter and focuses attention there, then you’re not going to have people protesting or litigating at the end. So that’s one piece in the process.

The other significant piece where the public has a right to participate is that the agency has to release and make public its draft environmental impact statement and the public has the opportunity to comment on that.

MELINDA TUHUS: Is it after the public comment period that one or more organizations could sue to try to stop this change?

SHARON BUCCINO: It’s only when the rule is actually finalized and takes effect that creates the opportunity and the right to seek judicial review of that. It isn’t just an environmental law; it’s at the core of our democracy. And I think that’s one reason why you’re seeing such a reaction to what President Trump has proposed. 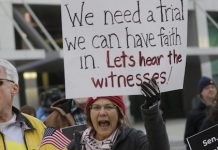 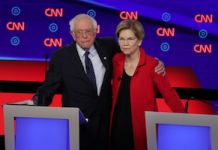 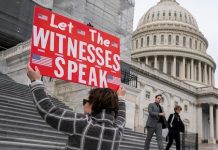