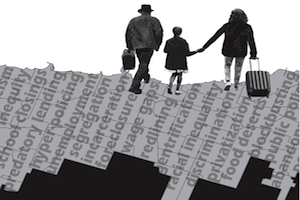 Minneapolis Police Officer Derek Chauvin’s murder of George Floyd, captured on a cell phone video recording, triggered national and international outrage followed by more than three weeks of sustained protests. The nation’s major newspapers, TV networks and and cable news outlets have covered the story — but mostly from the angle initially of property destruction and looting in some cities, later focusing on clashes between police and protesters.
Video cameras were rolling during dozens of unprovoked police attacks against peaceful protesters, where more than a few times police also targeted journalists and TV news crews.

Some, but not all corporate media outlets covering the protests informed readers and viewers about the long history of institutional racism in U.S. policing that’s resulted in the deaths of too many unarmed black men and women. But news coverage by and large has consistently avoided examining government policies that produce racial disparities in income and wealth — and lower life expectancy for people of color.

Between The Lines’ Scott Harris spoke with Norman Solomon, co-founder of RootsAction.org, who takes a critical look at corporate media’s coverage of police violence protests, and their lack of focus on the issues of class and inequality.

NORMAN SOLOMON: Well, really in the last three weeks, we’ve had a breakthrough in corporate media coverage of police violence against people of color. What has occurred across the country is much improved coverage of that. But I think for one thing, we should note that the criminal justice assault on people of color and often worst assault against black people doesn’t end with the police baton or the police gun. It also goes on into the courtrooms and into the jails and prisons. So even though there’s been a lot of progress in the last few weeks on its own terms dealing with law enforcement and African Americans as a topic, the mass media have a long way to go. But the situation that African-Americans face in this country is not in a vacuum of being put under the gun – sometimes literally from police.

There’s a 10 percent amount of average family wealth for African-Americans compared to white people. In other words, nearly 10 times as much wealth among the average white person, than the average African-American. And that is a clue to the kind of economic oppression that is so ongoing. And, you know, when you stop and think about it, I think, It can really sink in how every facet of life – from healthcare to education to housing, to being able to avoid some of the environmental hazards that cause so much health damage, to taking care of children and the elderly. In so many ways chronically, African-Americans on the whole are way in a disadvantage and that shortens life expectancy and also creates an atmosphere, a reality in people’s lives of desperation, of suffering and of massive inequality. And so, Scott, I think we need to step back and move forward and look at why is it that corporate media do not – with rare exceptions – address economic injustice, even while doing a bit of a better job dealing with racial injustice?

SCOTT HARRIS: Norman, in your article, you talk about some information dropped by Congresswoman Rashida Tlaib about the Detroit police budget and juxtaposing it to other human service needs in her community in Detroit. Tell us a little bit about that stark graph there.

NORMAN SOLOMON: Yeah, it’s stunning. The first-term Congresswoman Rashida Tlaib in Detroit tweeted out about a week ago a bar graph and the statistics where the city of Detroit through the city council is spending more than $200 million a year on police and $9 million on healthcare. I mean, this is just a smoking gun for the class war on low-income people. And as we were talking about, people of color are especially in the crossfire at the same time that people of all races suffer from these built-in inequities in what we call the capitalist system. And that’s why I think democratic socialism and programs that would extend greatly the progress from the New Deal – so what had been accomplished in the past through that and the truncated Great Society, the 1960s, could be expanded greatly and built into the structures of society woven into the fabric. So this is the battle coming up ahead in the November elections and well beyond.

SCOTT HARRIS: Norman, we’ve seen an unprecedented coast-to-coast demonstrations against police violence and racial inequities across this country. What is the future of this movement? Or is it a movement? That’s maybe the bigger question. Is this a movement that’s going to take on all the important elements that we’ve been talking about here this evening that contribute to police violence and racial inequities, getting to the root of the problem? Do you see elements within the protest movements and the organizers and the direction this thing may be headed into a more broad-based movement that can really attack the root causes of the issues people are in the streets for?

NORMAN SOLOMON: I think the potential is really there. A lot of the leadership and the materials that have been put out by the Black Lives Matter movement have been very articulate, very deep, inclusive of, but going way beyond the police violence and killing that, unfortunately is routine in this country. And so it’s yet to be seen and yet to be achieved. These issues are so interwoven and the mass media, I believe, are so pivotal in blunting the impact of movements by circumscribing their focus and their implication. So it’s a push from the grassroots to prevent this important upsurge from being, if not trivialized, at least sequestered into a very small space.

For more information, visit Solomon’s website at normansolomon.com and Roots Action at RootsAction.org. 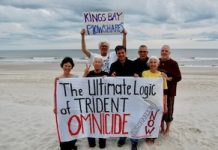 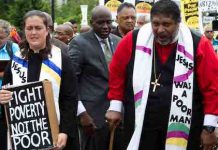 ‘America, Accepting Death Is Not an Option Anymore’