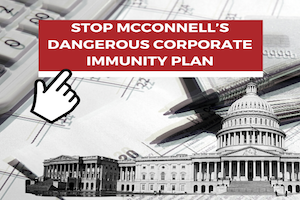 In advance of President Donald Trump’s poorly attended and controversial campaign rally in Tulsa, Oklahoma on June 20, his supporters registering to attend the event were forced to sign a waiver, assuming all risks related to exposure to COVID-19 and promise not to sue the president or his campaign for illness or injury. This came as 29 states saw a dramatic increase in the number of coronavirus cases.

This same mindset of shielding is behind an effort by the U.S. Chamber of Commerce and the American Legislative Exchange Council to push Congress to grant temporary legal immunity from coronavirus-related lawsuits that they assert is critical to re-opening the U.S. economy. Republican Senate Majority Leader Mitch McConnell and Trump have threatened to hold any future COVID-19 aid package hostage unless business immunity is included.

But while some states have passed corporate immunity legislation and some governors have issued simila rexecutive orders, congressional Democrats, labor unions and more than 100 civil society and public interest groups are strongly opposed to the proposal. They maintain that granting such immunity will create a disincentive for companies to protect worker safety and ensure workplaces and retail spaces are safe. Between The lines’ Scott Harris spoke with Remington A. Gregg, counsel for Civil Justice and Consumer Rights with Public Citizen, who explains why corporate lobbyist’ call for immunity is based on a false choice between re-opening the economy and assuring that businesses are held accountable for their actions or inaction during the pandemic.

REMINGTON A. GREGG: What this would do is a federal law would paper over the laws of every state of all 50 states and say, you may not go into a state court to bring a claim related to coronavirus. So that in and of itself is incredibly sweeping because it would pre-empt every state’s law. And number two, it’s sweeping because obviously it relates to workers and it relates to consumers. But Mitch McConnell has talked about everything that is coronavirus related.

The EPA , the Environmental Protection Agency, has already said that they’re not regulating. They’re not enforcing the law during the pandemic. So let’s say you have a corporate wrongdoer who’s, you know, polluting the water Flint-style and people get sick, people die. And this is two or three, four years later that you’re able to make the connection that these corporate wrongdoers did this. And you go to court to sue them. And their corporate lawyer says, “Sorry, this is a coronavirus-related lawsuit.” So we’re talking about environmental claims.

Let’s say you have a civil rights claim. You go to work and a lot of workplaces are now starting to say, when you come back to work, you have to do temperature checks. Let’s say that they use the temperature check as a pretext to fire you because they wanted to get rid of you for a long time. And you try to bring a civil rights claim which is federal and state law. And you say, I want to sue. And, the employer says, I’m sorry, this is a coronavirus-related lawsuit. So we’re just not talking about that this would impact workers – as incredibly important as it is, because it is, as well as consumers and patients because they are impacted in nursing homes. But this really does run such a sweeping brush in terms of how it would immunize businesses.

And the last thing I would say is that Mitch McConnell said that he wants to immunize businesses going back to December of last year, all the way through 2024. This is a gender justice issue because so many women are being forced back into the workforce. This is a racial justice issue because so many black and brown people are on the forefront of getting our economy back up and running. And so what a lot of Democrats in Congress are now saying is we cannot reopen our economy on the backs of black and brown workers and also take away any ability for them to hold corporate wrongdoers accountable should they (not take reasonable) steps to keep their workers and their consumers safe.

SCOTT HARRIS: The Republicans make the argument that this kind of granting of immunity is a prerequisite to reopening the U.S. economy to give businesses, large corporations and retail outfits, the security that they can open up without getting a lot of lawsuits. But I also wanted to explore with you why your group and many others believe this granting of immunity would be a severe disincentive for companies to maintain safe workplaces and protect their workers and consumers.

REMINGTON A. GREGG: It would make workplaces and work spaces less safe because our system of accountability and especially corporate accountability is based on two pillars. Number one, government enforcement. Right now we see a Trump administration that is completely unwilling to enforce seemingly any law against a company. They delight in deregulation.

The second pillar is the ability to go to court, to hold a company accountable. If you remove that pillar as well, then there’s absolutely no way to hold a company accountable for their actions. And what will happen is, I mean, we’re already seeing companies opening up and businesses opening up too fast and too furiously, you know, for just the sake of the almighty dollar, if there’s nothing stopping them from doing the (wrong) thing, they won’t. If they can put profits over people and not get in trouble, they will. So this is incredibly important for the entire economy. Consumers will not shop and dine if they feel unsafe. And removing liability for companies, immunizing businesses is going to do exactly that – people will feel not safe. They won’t want to go out, they won’t want to shop. So it not only will make workers less safe. It will stymie our recovery. So there’s absolutely no reason why we should be doing this. The only reason why we’re doing it is because the Chamber of Commerce is pushing and pushing, and they’re using a pandemic as a hook to get a wishlist item. 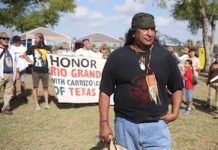 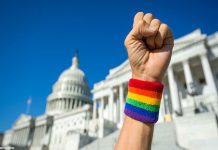