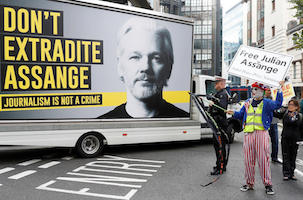 The long saga of the U.S. government’s attempt to extradite WikiLeaks founder Julian Assange from a British prison to face espionage charges in the U.S. was dealt a setback on Jan. 4. District Judge Vanessa Baraitser ruled against the U.S., saying Assange would be at extreme risk of suicide if held in a U.S. prison. But the judge rejected Assange’s lawyers’ claims that the charges were an attack on press freedom and were politically motivated.

In 2010, Assange published secret U.S. documents on U.S. conduct in the Iraq and Afghan wars as well as State Department cables sent to him by Army intelligence analyst Chelsea Manning (then known as Bradley Manning). He then took refuge in the Ecuadorean embassy in London and continued working and living there for seven years to avoid extradition to Sweden to face sexual assault charges that were later dropped. Assange was evicted from Ecuador’s embassy in April 2019 and arrested by British authorities.

Between The Lines’ Melinda Tuhus spoke with James Goodale, a former vice chairman and general counsel with the New York Times and author of “Fighting for the Press: The Inside Story of the Pentagon Papers and Other Battles.” Now a professor at Fordham Law School, Goodale discusses the U.K. court ruling and what could happen next in the legal battle.

JAMES GOODALE: He has been accused in the U.S. about violating U.S. laws. The U.S. calls up and says, “Hey, we got this guy over there. He’s violating U.S. laws. Catch him and hold him until you can send him back to us on whatever rules you have governing the remission of persons to this country. So, yeah, it’s just U.S. laws he’s being held for.

MELINDA TUHUS: Can it be appealed, and if so, by whom?

JAMES GOODALE: What happens is, this case is being run entirely by U.K. lawyers; they’re called QC — they’re trial lawyers, Queen’s Counsel. So they try the case, they appeal it, they’re the ones who speak, but everyone tells me that the case is being run really by the CIA and the U.S. Justice Department. And the U.K. lawyers represent the U.S. basically, in the U.K.

MELINDA TUHUS: James Goodale, the judge was really delivering more of an indictment of the U.S. penal system than a clear statement about whether what Julian Assange did should be protected as free speech, wasn’t she?

JAMES GOODALE: That’s a U.S. issue. There’s no First Amendment, really, to speak of in England. And if there were, it wouldn’t make that much difference, because it’s got to be decided back here, whether the U.S. First Amendment protects him under U.S. laws. So, she can’t decide over there what’s going to be decided here. The big time issue she takes little pieces out of here and there. But she can’t really decide the case. All she can decide is whether he comes back here or not. So, she takes a look at the prison system and says to herself, I don’t like what I see. You could say it puts a critical eye on a system the U.S. has for its prisoners who are involved with national security.

And we have to recognize first of all, that the prisoners about whom she is talking are terrorists. So, you got a question first of all whether terrorists should be treated that way or not; that’s sort of a general question that’s out there.

But it’s not a terrorist case; it’s Assange. She says, Well, look, they’ve got these rules for those who are in these sorts of prisons; let’s apply them to Assange. And she is saying, effectively, that doesn’t make too much sense for Assange, so there’s something inadequate with respect to the protection that an Assange type gets in the prisons in the U.S. And also dive in to the fact that he’s being sent away to the U.S. under the Espionage Act because an Espionage Act is for spies, and terrorists are more like spies than Assange is. But in any event, the Espionage Act doesn’t fit Assange very well. I don’t think it’s a wholesale indictment of the U.S. justice system; I think that would be going too far. But I think it’s fair to say it really raises a question about how fair it is with respect to someone like Assange.

MELINDA TUHUS: When you said the Espionage Act didn’t fit, I heard that it’s never been used against a journalist. And I guess that’s the heart of the matter – does the government consider him a journalist?

JAMES GOODALE: Well, here’s the thing: there is no law. Congress has never passed a law that addresses leaks. That’s Number 1. Number 2, the Justice Department looks around for what laws they might have, and they come up with something called the Espionage Act and just by its title, you know it doesn’t apply to Assange. The language is imprecise to begin with and secondly, historically, it came out of the first World War, and they’re looking at German spies, basically.

So, when you look at the language and think about its history and then try to apply it to someone in the digital age who is gathering and publishing information that’s been leaked, it makes no sense to me at all. We do have a First Amendment in this country, and the First Amendment is there, in this case to permit the public to know about leaks of classified information. Why? Because everything’s classified – millions, millions, millions of documents. And it’s not as though we want to know about the inner secrets. We want to know how government works. And if every time we ask the government and they say, I won’t tell you because it’s secret, then they go off and do any darn thing they want to, including committing war crimes and not giving us any access to what they’ve done — so, what this case is about is how we, the American public, get access to that information. 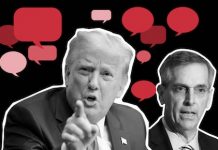 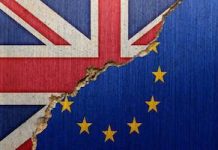 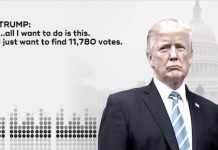 Trump’s Georgia Phone Call Was Likely a Crime, But Prosecution is Uncertain