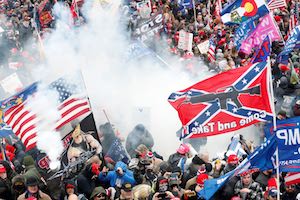 The Jan. 6 attack on the U.S. Capitol by a violent mob provoked by blatant lies about a “stolen election” spread by President Trump and Republican lawmakers claimed five lives, including a Capitol police officer. In the aftermath of law enforcement’s complete failure to protect the Capitol, House Democrats were briefed by Capitol police about several newly uncovered terrorist plots to overthrow the government, including a plan to surround the Capitol, the White House and Supreme Court and murder Democrats, allowing Republicans to take control of the government. Additionally, the FBI has sent a memo to law enforcement agencies across the country warning of possible armed protests at all 50 state Capitols starting Jan. 16.

The Trump supporters who invaded the halls of Congress on Jan. 6 displayed racist and anti-Semitic messages and Confederate symbols on banners, flags and T-shirts. Long before Donald Trump entered politics, the Republican party embraced white supremacy and authoritarianism, cultivating a hateful and racist support base whose common cause is the repression of communities of color and the subversion of democracy through voter suppression, gerrymandering and massive voter purges targeting black and brown Americans.

Between The Lines’ Scott Harris spoke with Bill Fletcher Jr., executive editor with Global African Worker, former president of TransAfrica Forum and a former senior staff person with the national AFL-CIO. Here he examines the central role white supremacy plays in the violent movement surrounding Donald Trump that led to the terrorist attack on the U.S. Capitol.

BILL FLETCHER JR.: It was a coup attempt. Trump was complicit as far as I’m concerned. When I hear these Republicans talking about freedom of speech, that all Trump did was encourage people to protest, I think that that is sophistry. The reality is that the president of the United States began tweeting awhile ago about Jan. 6 and emphasize that “It was going to be wild.” His intelligence apparatus knew that the right-wing, these fascists, were planning not simply marches, but were planning on smuggling weapons into Washington D.C. and were discussing the issue of an assault on Congress. Had Trump been a reasonable person, even a conservative or reasonable conservative, he would’ve made it clear in everything leading up to Jan. 6 that he was disowning any attempted violence. And he would have been mobilizing all available forces to ensure that nothing happened. He did nothing of the kind.

He incited the crowd and in traditional opportunistic fashion, promised the crowd that he was going to march with them to the Capitol. And then didn’t do it, showing, you know, the kind of cowardice that he actually has. This was a despicable act, but completely predictable.

And this is one of the things that infuriates me about many liberals and progressives that through much of 2020, there was a level of denial of the rabidity of the Trump administration and the potential for an insane coup. There were unfortunately those that thought that there was no difference between Trump and Biden, at least until the beginning of September, when a lot of people started realizing what was at stake. But I think that many progressives made a terrible mistake in not understanding that it wasn’t Trump versus Biden. It was people in favor of democracy versus a right-wing popululist movement within which there is a neo-fascist core.

SCOTT HARRIS: Thank you for that, Bill. The next important thing we’re dealing with as a nation is, how we should address the rise of an extremist white supremacist violent movement that appears to have been inspired by Donald Trump’s racism and xenophobia, but has a longer history than that of course — going back to Nixon and Reagan and the Southern strategy. And further, it appears right now that these militia, vigilante Proud Boys, Oathkeepers — these armed groups seem to be an armed wing of the Republican party.

These are people that are looking for the radical restructuring of the United States in order for a pure white capitalism to re-emerge on the ashes of what is left. These are people that are seeking an apocalypse. Some of them have religious motives. Others genocidal. Absolutely. But their critical image is what I would call a neo-Confederate image. They want a modern version of the Confederate States of America, a modern version of apartheid South Africa.

Some of them are prepared to make peace with some level, some elements of people of color, as long as those people of color are willing to swear allegiance to the white Republic. Or to try to pretend that they themselves are white. That’s what we’re looking at. They wish to start a war — civil war, and I think they have to be crushed. I don’t think that there is negotiating room with fascists. I think you can negotiate with conservatives, liberals, etc. There is no room to negotiate with fascists. Fascists aren’t interested in negotiations. They’re interested in our destruction. So we have to make sure that they are eliminated. And I’m suggesting that in a legal and nonviolent way. They need to be blocked. Their organizations need to be destroyed, driven bankrupt. They need to be put in the jail. Anyone that was associated with what happened on Jan. 6 needs to be incarcerated. And it needs to be very serious, serious charges brought against the people. 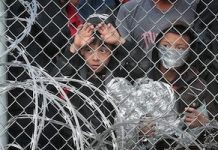 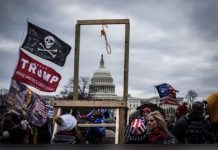