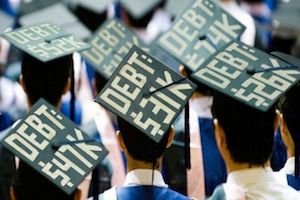 The Federal Reserve estimated at the end of 2020 that 45 million Americans collectively owed more than $1.7 trillion in student loans — an increase of nearly 4 percent over the same period last year. U.S. student debt has increased by approximately 102 percent in the past 10 years.

As a presidential candidate, Joe Biden campaigned to make ambitious changes in U.S. higher education, as well as making a commitment to relief for student loan borrowers. After the election, Biden’s transition team said the president would expedite a request to Congress for $10,000 in loan cancellation for all federal borrowers.

But at a CNN-sponsored town hall meeting on Feb. 16, Biden refused to support Democratic resolutions in both houses of Congress that called for the cancellation of $50,000 in student debt per borrower, maintaining he didn’t have the authority through executive action to do so, and inferred the debt relief would primarily benefit affluent Ivy League college students with large loans. A group of 17 state attorneys general responded by asserting Biden does have the authority to cancel student debt under the Higher Education Act.

Between The Lines’ Scott Harris spoke with Thomas Gokey, a visual artist, organizer and co-founder of the group Debt Collective, who talks about the current national campaign pressuring Biden and Congress to take action now to cancel student debt.

THOMAS GORKEY: There’s currently $1.7 trillion worth of student debt. Forty-five million people have student debt. It’s intergenerational. We’re seeing the group with the fastest growing student debt balance are actually senior citizens. There are parents who took out that to send their kids to college. There are people have never been able to pay off their own student debt who are now trying to figure out how their children are going to be able to afford to get an education. It’s disrupting people’s lives in severe ways — from their inability to have shelter, whether that’s buying a home or just renting an apartment. Even if you’re current on your student loan, your debt-to-income ratio can prevent you from doing these other things.

One of our members shared this story over the weekend. We had an event with Nina Turner, who’s running for Congress in Ohio. And one of our members said, you know, she can’t get married. She’s basically been engaged for six months, but it just doesn’t make sense for her partner to sort of become legally responsible for this debt that’s in her name.

There are medical studies showing that people in student debt have higher blood pressure, greater stress levels, they get less sleep. And then if you zoom out to the macro level, it’s a huge, huge drag on the economy. So even if you’ve already paid back all of your student debt or even if you’d never had student debt to begin with, this $1.7 trillion worth of student debt is directly hurting you as well. And it benefits all of us to cancel it.

The economists who have studied this can calculate the millions of jobs that get created each year — billions of dollars added to the GDP over the next decade. And we kind of need that right now, given everything that’s going on. So there’s really no good reason not to do it. Student debt is almost perfectly calibrated to reinforce the American caste system. Black women hold the largest student debt burdens, whereas the children of the truly wealthy have no student debt at all. So canceling student debt helps us narrow the racial wealth gap. Again, there’s just no good reason not to cancel it all.

SCOTT HARRIS: Review for our audience, Joe Biden’s policy on canceling student debt, taking into account his response to a question from a student at a recent CNN town hall meeting, where he said he would not make $50,000 per student debt cancellation happen. Very explicit about a “no” on that question. But what do we know about his policy in general?

THOMAS GORKEY: So our theory of change has never been that Joe Biden or any politician is going to do the right thing because it’s the right thing to do, right? So our theory of change is that debtors need to organize and that the people have all of the power. And if we organize and get powerful enough, it almost doesn’t matter what Joe Biden wants to do. He’s going to have to do what we demand.

And, you know, Joe Biden lied. He does have this authority and I’m not personally discouraged at all by the ridiculous things he said this week, because you know, we’ve always known who he is and that hasn’t factored into our theory of how we’re going to win. But it has been useful to see the enormous amount of anger and blowback that he and his administration have gotten for those comments.

And, I think that that blowback is really useful. And it sends a very powerful message that the Democrats should be frightened of. I mean, we know that one out of five Trump voters would vote for the Democrats if the Democrats canceled all student debt. That was polled. Last week, a poll was released that said 40 percent of black voters are not going to vote in the next election if Biden doesn’t cancel student debt.

So the electoral consequences here couldn’t be starker. And I think that they should take that seriously. It’s the moral thing to do. It’s the only thing that makes sense from an economic perspective. That debt is never going to get repaid. I mean, that’s just a fact. I think we will win mass cancellation. But we’re only going to win if we organize, right? We’re only gonna win what we organize for. Nothing is inevitable about this. Yeah, Biden absolutely has that authority and he wasn’t telling the truth. And a lot of people have pushed back and pointed out “you can’t get away with just lying about this. We know you have the authority.”

SCOTT HARRIS: Well, Thomas we’re almost out of time and I want to make sure you mention to our listeners, the things they can do to find out more about your group “Debt Collective” and the kinds of actions they can take in this moment where the nation is focused on student debt and what the federal government can do.

THOMAS GORKEY: Yeah, absolutely. You can go to DebtCollective.org and join. We are holding organizing calls, oftentimes several of them a day with different ways to get involved. We are planning a week of action the week of March 29 to April 2nd to call for full student debt cancellation. So you can organize a local action or join one. If there’s one already in progress in your area, yeah. Get involved. We’ve got nothing to lose, but our debt.

For more information, visit the Debt Collective at DebtCollective.org. 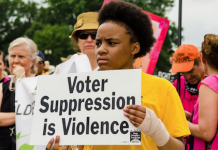 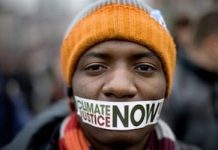 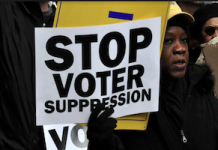