An effort by progressive members of Congress to reduce the Pentagon budget by 10 percent to fund human need during the economic crisis created by the coronavirus pandemic, failed in votes held in both the House and Senate in late July. The amendment to the National Defense Authorization Act was sponsored in the House by Democrats Reps. Barbara Lee of California and Mark Pocan of Wisconsin – and in the Senate by Independent Sens. Bernie Sanders of Vermont and Ed Markey of Massachusetts.

Sponsors of the legislation argued that redirecting $74 billion from the Pentagon to help Americans in need with healthcare, affordable housing, education and local infrastructure would better align with people’s actual priorities in this crisis, and that national security should be redefined in the wake of the global pandemic.

A poll conducted by Data for Progress found that 56 percent of the country supported the idea of defunding the military and use the money to fight COVID-19 and alleviate the growing housing crisis. The survey found that a majority of both Democrats and Republicans supported the proposal. Between The Lines’ Scott Harris spoke with Kevin Martin, president of Peace Action and the Peace Action Education Fund, who assesses the effort to redirect Pentagon funds to human needs, and next steps in the campaign to challenge the growth in military spending which has increased by 20 percent under the Trump regime.

KEVIN MARTIN: Well, we really appreciated Sen. Sanders putting that out and we worked with his staff to do it. And then also on the House side, too, with some of the progressive leaders. Now, the thing is, you know, the bizarro world of Washington where I live, this 10 percent cut in the gargantuan Pentagon budget is both on the one hand, completely insufficient for what we need and what we’ve needed for a long time. A 10 percent cut. We need to go well beyond that. And especially the way that Sanders and his supporters framed it was to address the Covid crisis and deal with particularly people that are in dire poverty or have lost their jobs or their healthcare or their housing from the pandemic. And to take that $74 billion, it would have been 10 percent, which is, you know, that’s pocket change, that’s paperclip money for the Pentagon, right?

Take that and put that to work to help actual people deal with the real threats to their lives, not wasting on the useless weapons that we’ll never use and don’t need. And if we do use them it’s to kill black and brown people in other countries not to defend our freedoms or any of the other garbage that they talk about, right? So on the one hand, it’s completely insufficient and also completely not viable politically in Washington. And, you know, I understand that. And certainly people that have looked at this for a long time, understand that, but that’s the reality of life in an imploding super power, you know, an expiring empire. We’re going to probably hold on to every nickel of that Pentagon budget until the whole country implodes.

That’s just the power of the military industrial complex, unless we, the people say, “No, that can’t be. Those can’t be the priorities. That can’t be how you spend our tax dollars. We need it to address the real security needs in our communities, in our household and not whatever, starting a new arms race with Russia, China, whatever nonsense the military industrial complex is coming up with.”

And, you know, unless we do that soon and link up with other powerful movements, this is going to be our reality. We’re an imploding superpower, and we’re going to hang on to all our weapons as long as we possibly can, until people say, “No, we won’t, we’re not going to tolerate that anymore.”

SCOTT HARRIS: And as you said, the coronavirus pandemic and the ensuing economic collapse here really paints in very stark relief, the mismatched priorities of the government here while we’re seeing austerity and a package of just, you know, moderate stimulus for people who’ve been out of work, record numbers of people on the street with no job during this health crisis.

KEVIN MARTIN: And you know, this stimulus package you’re talking about, it’ll help some people for a couple of weeks and that’s about it. And then what? They could be out on the street or hungry. I mean, it’s just, you know. And so this is, unfortunately what we are dealing with in this country, it’s just the war machine on autopilot. It just runs on autopilot. There’s no thought that goes into it. There’s no real discussion of, “Do we need this new weapon system, this new airplane that we need it because we sold the other airplane to eight other countries, and now we need a better airplane to defeat them? And we’re never going to have a war with them in the first place. Right.” It’s just lunacy, but that’s what happened. It’s just a war machine on autopilot.

SCOTT HARRIS: Well, thank you for that, Kevin, what’s the next step in this campaign? It’s not ended, of course.

KEVIN MARTIN: No. And, as I said, I appreciate Sen. Sanders and some of his other allies in terms of throwing this out there as a marker. And I think a lot of what’s going on in Congress right now, especially when we know we can pass good things in the House. Sanders has been a great leader on trying to stop us support for the horrific Saudi-led war in Yemen. We were able to pass that twice in both the House and the Senate. And of course it was vetoed by Trump and they weren’t able to override the veto. So there are a lot of things that we can pass in the House and sometimes in the Senate, too. And we know they’re not going to go any further with Trump in the White House. So some of these things are putting down markers for the future, what we could do next year legislatively.

I don’t think Biden is pro-peace or, you know, progressive or anything like that. Although, he does have some decent track record on some issues of diplomacy and arms control and etc. But if you have a new administration and a stronger progressive Congress, which we think we will, we might be able to go further. So, in some ways it was a little premature of Bernie to throw this out there, but I’m glad he did. It was worth putting it out there to say, “Hey, let’s cut the Pentagon budget. ‘Cause it’s the sacred cow, right? You can’t talk about cutting the Pentagon budget. You’re against America, against our defense. You’re a commie.” What other, other garbage hurled at you if you dare, you know, suggest that there’s a better way to spend our tax dollars, than useless weapons and you know, starting arms races, right? That we could possibly take care of the common good of people. Right? So it was good that it was out there.

And I suspect we won’t have another vote this year, but there may be some cuts when we get to the defense appropriations. We can look at cutting specific weapons systems that are particularly worthless. Look at cutting back on some of the nuclear weapons, modernization, some of the F-35s and other just, you know, garbage like Star Wars missile defense, etc. We probably won’t win on those again — but again, it’s good to get members of Congress on record, hold them accountable and then see what we’re able to do next year when we’re in better shape. But there’s no reason to think we’re gonna have a massive cut in the Pentagon budget next year, either. This is obviously a long-term issue. The urgency that I think ought to be imparted is because of the pandemic. But, you know, Peace Action and our supporters have been for cutting the Pentagon budget for a long, long time now.

Learn more about the campaign to challenge the record growth in U.S. military spending by visiting Peace Action at peaceaction.org. 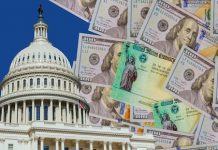