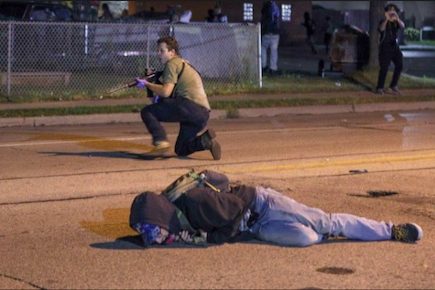 The Kenosha, Wisconsin jury’s decision to acquit 18-year-old Kyle Rittenhouse on all charges related to his shooting to death two racial justice protesters and severely wounding a third man during demonstrations following the August 2020 police shooting of a 29-year-old black man, Jacob Blake, sent shock waves across the U.S. White supremacist and far right militia groups saw the verdict as a victory and elevated Rittenhouse as a hero. So, too, did Republican House Reps. Madison Cawthorn, Matt Gaetz and Paul Gosar, who offered the job of congressional intern to Rittenhouse, a teenager who has no other qualification for the job other than murdering two social justice activists.

The Republican party and their allies’ embrace of violence is now a staple of their members’ rhetoric and action. Dozens of GOP politicians lionized the insurrectionists who assaulted the Capitol on Jan. 6 to overturn an election, killing five people. And after the House voted to censure Rep. Gosar for posting an anime video depicting himself killing Rep. Alexandria Ocasio Cortez and attacking President Biden, Republican leaders failed to condemn his behavior. Additionally, at the local level, right-wing death threats are now common, targeting public health, education and election officials. A recent poll found that 30 percent of Republicans believe that “they may have to resort to violence in order to save our country.”

Between The Lines’ Scott Harris spoke with Ruth Ben-Ghiat, professor of history and Italian studies at New York University, who discusses her views on the rise of armed white supremacist groups in the U.S., the embrace of extremism and violence within the Republican Party and the threat to America’s democracy.

RUTH BEN-GHIAT: So what we’re seeing, generally speaking in the U.S. with Republicans is a legitimation of violence as a normal way of doing politics, as a way of getting what you want in politics. And of course, this had been developing and January 6 was huge.

It broke all these taboos. It was a huge advance. And so you also see, unsurprisingly, a parallel kind of lawless masculinity. And that’s because the leader sets the tone and Donald Trump being a sexual assaultor, a serial one as well as corrupt.

He kind of embodies this linkage between them. So we’re seeing, you know, people who feel empowered, that’s very important. They feel they can do things with impunity. So Paul Gosar and masculinity has become kind of a — you’ll see it’s going to become more and more of a talking point for Republicans. And this is why.

SCOTT HARRIS: What’s been the response of the country to what we’ve seen unfold? I will just ask you about the media. Is what we’re experiencing right now being normalized by the media in terms of, well, these are these are just politicians barking at one another. And I can’t help but feel that what we’re seeing unfold is a lot more dangerous than what our media is saying about it and its commentary about what’s happening.

RUTH BEN-GHIAT: Yes, I think you’re right, and it’s been one of the things that’s motivated all of my work since 2016 because I had the skill set from being a historian
of fascism and autocracy to recognize what was going on very early. But also to recognize that a lot of the population and the media didn’t have any experience with autocracy. In fact, the first people who started to write to me when I started seeing Trump was an authoritarian in 2016-17 were people who had fled dictatorships, either communist ones or military juntas in Latin America. They knew. They saw what was going on.

But the media did not have the skills in large part to see it in this frame. And although Trump started attacking the media and making them kind of enemy of the state, an enemy of the people. That’s just why they engaged in this kind of both sides-ism because they didn’t realize that the GOP was exiting democracy. And once you have a bipartisan system in which one party is outside of democracy, you can’t continue with your old model of media coverage, and it’s taken them a long time to get there where they start using the word authoritarian, which they do now. You hear that word all the time. But those of us who worked on this for some time and we know the history of these things, we’ve been talking about that for years.

SCOTT HARRIS: When we look at the acquittal of on all charges of Kyle Rittenhouse, who murdered two people and injured a third person in the Black Lives Matter protests in Kenosha, Wisconsin, what message is that sending to the rest of the country? There’s a lot of concern out there among activists, people who are protesting for social justice that they, too, may be in the crosshairs of these right-wing extremists who maybe now feel they have a green light to carry weapons to protests and to oppose those who they disagree with on major issues and use their guns to enforce that opposition.

RUTH BEN-GHIAT: Yeah. And unfortunately for us in America, the wild card of the American situation is guns, is hundreds of millions of guns in private hands and citizens being allowed to have arsenals, military grade weapons because in other countries where you have a 21st-century style autocracies — what I mean by that is in the old days, you know, you had this complete shut down of freedoms, you still have this in China and North Korea. But nowadays, people come to power by elections and then they manipulate elections to stay there, and they have a veneer of, you know, they have multi-party system. It’s just all fixed. But that’s how things work today. So we are headed toward something like that with all of the things the GOP are doing. And here you have gerrymandering and all the other things, voter suppression.

But you also have threat. So guns are essential to that threat. And so, for example, I’ve been tracking laws in Texas and other places that expand the powers of poll watchers. And these are volunteers. And in some states, like Texas, they can be armed with long guns, right?

And the new laws say that these poll watchers could be close enough to “see and hear what the voter is doing.” And if that person is armed, you can see the potential for intimidation is huge. So it’s not just they’re trying to not have people vote, they’re trying to make voting very threatening and guns are essential to that. So it becomes more like a a military junta with paramilitaries there. And so we have to shift the frame in which we see all of this and guns are the key to the intimidation. 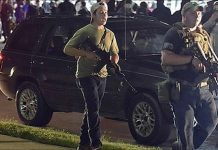 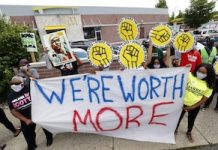 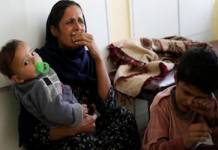 With Freeze of Assets, Millions of Afghan Civilians Face Starvation