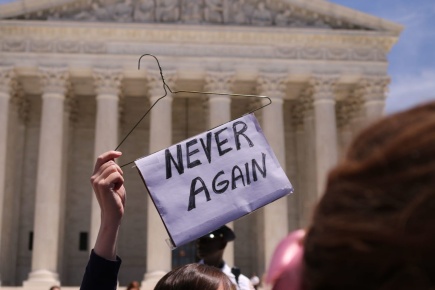 In May, Texas Gov. Greg Abbott signed into law a measure that prohibits abortions as early as six weeks — before most women know they are pregnant. In Texas, the legislation that took effect Sept. 1 opened the door for almost any private citizen to become abortion “bounty hunters,” allowing individuals to sue anyone participating in an abortion and be awarded at least $10,000, as well as costs for attorney’s fees, if they won.

By a 5 to 4 vote, the conservative majority on the U.S. Supreme Court refused to block the Texas law, maintaining that it was not ruling on the constitutionality of the Texas legislation. But in so doing, permitted the state to impose the most restrictive abortion law in the nation and inspired other GOP-controlled states to impose similar laws.

The Supreme Court will soon be hearing a challenge to a Mississippi law that would ban most abortions after 15 weeks, which many reproductive rights activists believe could lead to new limits on abortions nationwide and possibly overturn Roe v. Wade, the high court’s ruling that legalized abortion in 1973. Between The Lines’ Scott Harris spoke with Jenny Brown, a member of the National Women’s Liberation and a leader in the fight to permit the sale of morning-after pills over the counter in the U.S. and author of “Without Apology: The Abortion Struggle Now.” Brown discusses how Congress could act to protect women’s right to choose and halt the conservative-dominated Supreme Court’s attack on reproductive freedoms.

JENNY BROWN: The Supreme Court took it out of the lower court’s hands and said, “Well, we haven’t had enough time to think about this, this really novel idea that citizens could basically be bounty hunters and enforce anti-abortion laws against random women that they don’t know. And, so, gosh, we just don’t know about it, but we’re going to let this law stand and see what happens.”

Now, this is provisional. The lower court is still considering it and is actually going to be deciding whether or not it should be let stand. But when the abortion providers of Texas asked the higher court to suspend the law in order to have it considered by the lower court, they and the Supreme Court refused, which is why we now have this situation in Texas where people who want an abortion after six weeks, essentially it’s illegal to get one. And if anybody helps them, they would be subject to being sued. So that’s obviously created a lot of chaos and stress for everybody who’s in that situation right now.

SCOTT HARRIS: There’s a lot of hand-wringing right now among Democrats with their slim majorities in the House and Senate and the Senate filibuster that they’re powerless to do anything. From your perspective, what can they do at this moment?

JENNY BROWN: Well, right now, that bill, The Women’s Health Protection Act, which would make it illegal to restrict abortion rights in state laws, has 48 Senate co-sponsors. So, a lot of people are supporting it already. And there are two Republicans in Alaska and Maine that say they are for abortion rights. So you could have 50 senators quite easily. The problem is the filibuster, right? Where people think it means you have to stand up and give speeches and wearing an adult diaper and what-not. That’s not the filibuster. The filibuster these days just means that 40 senators say they’re not going to support something. And that completely takes it off the table for the entire country. Right?

So, I think a lot of things are right now piling up behind this excuse that we can’t end the filibuster, including a $15 an hour minimum wage, which would be a substantial and important for a lot of people. The idea of Voting Rights Act, which would re-introduce a right to vote in states where that’s being chipped away. The idea of a Green New Deal, all of these things are held up and are apparently inconceivable just because of this (filibuster) rule in the Senate. So, I think that there are growing forces asking that that rule be changed. And I think, you know, this particular situation brings a lot more forces into play to ask that the filibuster be changed.

And of course, people say, Well, if the Democrats get rid of the filibuster, what will happen when the Republicans get back in? Well, there’s nothing to stop the Republicans from ending the filibuster when they take power and given the tenor of the Republican party right now, it’s very likely that that’s exactly what they would do. So all of this hand-wringing about the preciousness of the filibuster is — we have to think about, you know, what are we really saying? It’s okay for this undemocratic rule to stop all the things that we need in our country for people to have decent lives and, you know, freedom to control their reproduction, but to harden our infrastructure against the ravages of climate change and actually to reverse climate change. I mean, these are very important things that are being held up and the legislature that we rely on nationally to do these things is completely hamstrung and has been for a long time. I think it’s time to, to look at that.

SCOTT HARRIS: The Women’s March organization nationally is called for Oct. 2 protests on this Texas law and the role of the U.S. Supreme court. Here, you have a particular suggestion for the movement in terms of their targets during these upcoming protests. Tell us about that.

JENNY BROWN: I think they picked Oct. 2 because the Supreme Court goes back into session the Monday after that. So it’s WomenMarch.com. If people are interested in signing up, there are 90 signed on. It’s not one big March in D.C. I think they worried that all the travel that would be required to do that would spread COVID. So there are marches in every state. And I think the target — and this may well be the target, I’m not privy to some of the discussions that they’re having — should be the passage of a Women’s Health Protection Act and the ending of the filibuster in order to do that. So I think that is a good target. I do not think that the courts should be the target anymore, just simply because I think the Supreme Court is set on this course of rolling back abortion rights to the point where basically nobody’s going to have any rights.

I think that the proper target is Congress, and we need to light a fire under them to guarantee our rights to abortion. And, then, you know, there are a lot of other things that we could get if we really push the $15 an hour minimum wage, Green New Deal, the Pro Act, which would make it essentially legal again to organize unions in the United States, all of these things are blocked up by the filibuster. And so, it’s time for us to really demand that the Democrats take action and do some of the things that we need. And this is a big one. 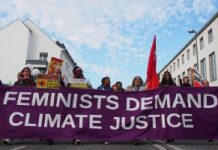 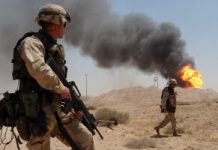 New Report Reveals the High Cost of U.S. Militarism Since 9/11