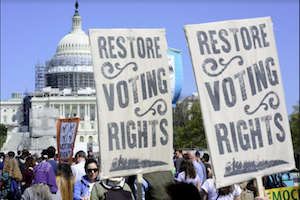 As citizens around the country have either already voted, or are preparing to vote on Election Day, Nov. 3, the issue of felony disenfranchisement is once again front and center. A recent study published by the Sentencing Project found a very modest decline in the number of people with a felony conviction in their past prohibited from voting, from more than 6 million in 2016 to 5.2 million in 2020. States vary greatly in how they handle the issue, from two states — Vermont and Maine — which allow incarcerated people to vote —  to 11 states that indefinitely disenfranchise felons, potentially for life. Today, 37 states allow something in between, such as restricting voting rights for individuals who remain under parole or probation supervision.

The study found that even though there have been legislative reforms in states to increase voting rights, those changes haven’t affected as many people as hoped. In two states, citizens with felony convictions were deemed eligible to vote by executive order of their governors, but the study didn’t include those changes because a governor’s executive order can easily be reversed by their successors.

Between The Lines’ Melinda Tuhus spoke with Christopher Uggen, Regents Professor and Distinguished McKnight Professor of Sociology and Law at the University of Minnesota, and the lead author of the new study titled, “Locked Out 2020.” Here, Uggen explains why the number of former felons eligible to vote has remained low, and the barriers they still face.

CHRISTOPHER UGGEN: We, too, were optimistic that the numbers would have declined since our last report in 2016. That was over 6 million. And the reason for that is that we have seen a lot of legal change. So many states have adjusted their procedures in ways that would re-enfranchise people who were in the community, in particular, whether parole, probation supervision, or whether they were post-sentence. But it turns out that the changes didn’t affect quite so many people in the individual states, and in particular, Florida. There were high hopes in 2018 when Florida passed a ballot referendum to expand voting to people post-sentence, and as it turns out, though, that was undercut quite a bit by the requirement that before restoring the right to vote that they had to be paid off on all of their monetary sanctions — fines, fees and restitution. And so, for that reason there are still approximately 900,000 people still post-sentence in Florida who will not have the right to vote in the coming election.

MELINDA TUHUS: I just want to clarify that that was a law passed by the state legislature; it wasn’t part of the referendum, which was approved by 64 percent of voters, right?

CHRISTOPHER UGGEN: Exactly, right. So, this alone would have reduced things quite a bit to less than 4.5 million, certainly. So the magnitude of changes, as is often the case, is driven by a few states. And another topline result that is fairly consistent but perhaps distressing is that there is still about 75  of people who are disenfranchised are not incarcerated: that is, they are serving time on community supervision or they have completed their community supervision obligations and they remain disenfranchised post-sentence. But I say this, that this is an extremely unusual situation by international standards and by historical standards. Certainly when many of these laws were passed in the 19th century, these institutions of community supervision didn’t really exist. This is one of the reasons that the U.S. disenfranchises such a large share of our population relative to other nations where the fulcrum of debate is whether prisoners should be allowed to vote, as is the practice in many nations in the European Union and elsewhere.

CHRISTOPHER UGGEN: Yeah, you know I would say there are both processes at work here. One thing I think it’s important to distinguish is the right to vote from the exercise of that right. I use the example of the pandemic; when certain things closed, like your gym or your library, etc., we feel that as a loss even though we haven’t visited those places in recent weeks, and it’s similar with voting, although at a much more fundamental level, that is, when everyone is talking about the election, or the debates are on in public space, there is this sting of pain and regret when folks are not able to participate and some have described it to me as being like salt in the wound that continues. So there is a loss felt, certainly, in the absence of exercising that right.

I’d also say that one of the reasons for relatively low turnout relates to the characteristics of people with felony convictions, and one that doesn’t get discussed so much is mobility and the lack of stable housing that people have. If we look at turnout in the general population, it’s the case that once people have a more permanent address — and young people in particular — they begin to vote more regularly. And so re-entry from incarceration, it’s very difficult to obtain stable housing and to have that sort of permanent address and a utility bill with your name on it and different sorts of demonstrations of residence that we all have to come up with when we register to vote. So that’s one of the barriers, simply having identification forms, etc. And then, many people who are under supervision are relatively young, and they will begin to vote at higher rates as they get older.

And then a final thing that really has a chilling effect that, again, is not recognized enough is that it’s illegal to vote while one is on probation supervision, parole supervision, or in states like Florida, post-sentence. And that is a felony-level offense and people can and do go to prison, or jail, for violating it. And so if you have any doubt whatsoever about your status, about your right to vote, you will likely avoid the ballot box; you will likely avoid voting for fear of catching a new felony.

For more information, visit the Sentencing Project at SentencingProject.org.

Covering under-reported news stories that matter to the well-being of our collective humanity is part of our mission. If you appreciate our efforts, please make a donation to our Fall/Winter 2020 campaign today. Please sustain our efforts by donating here. 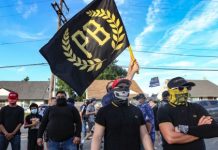 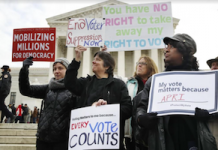 Mass Mobilization: The Most Effective Tactic to Protect the U.S. Election 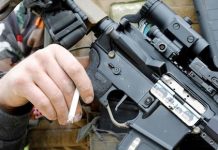