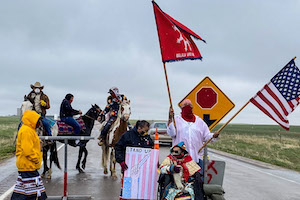 Two Sioux tribes in South Dakota have set up checkpoints where highways cross their reservations in an effort to keep the coronavirus from infecting their people. South Dakota’s Gov. Christy Noem has ordered tribal leaders to remove the checkpoints or face legal action. The Republican governor never enacted a stay-at-home order in her state. The Cheyenne River Sioux reservation covers 5,000 square miles, slightly smaller than the state of Connecticut. Nine checkpoints have been set up, where travelers are asked to answer a health questionnaire, and any from a COVID-19 hotspot are asked to reroute their journey. However, all commercial, medical and other essential workers are allowed to pass unhindered.

Tribal Chairman Harold Frazier says his goal is to contain and track the virus, and adds that for his 12,000 members there are only 8 beds in the tribe’s on-site clinic, with the nearest critical care hospital a three-hour drive away in Rapid City. Between The Lines’ Melinda Tuhus spoke with Chairman Frazier about the steps the tribe is taking to prevent the spread of the coronavirus, and his response to the governor’s threat.

HAROLD FRAZIER: Once we had one case in South Dakota, we got serious and we sat down and said, “What do we need to do? What can we do?” And looking at the very minimal medical services that are here on our reservation, we felt that prevention was one of the main things we can do. So we started planning around prevention, and as days went on we kept seeing and learning more, and I think the key to a virus is to try to isolate it, keep it contained and don’t let it spread. So we gotta track this, we gotta find it. We decided the best thing to do is monitor who comes and goes through our home. That’s one of the main reasons that we put these checkpoints – to monitor and to track individuals coming and going from our reservation. The main thing is to try to prevent death from coming to our people. We’re just here to try to save lives.

MELINDA TUHUS: So these checkpoints are set up on state highways that go through the reservation, is that right?

HAROLD FRAZIER: You know, in my opinion, these roads are maintained by the state, but they don’t own them. We own the land, you know, and I haven’t seen any, and that’s why I asked them: Show me the deed, show me your right of way, show me a legal document that says otherwise. Until you [do], we own ‘em.

MELINDA TUHUS: So the governor has told you to remove the checkpoints, right? Did the governor take any steps to protect people from the spread of the coronavirus?

HAROLD FRAZIER: She shut down the schools, which was really good. Her actions were non-essentials were working from home, and essentials were working. I thought they were good things, but other than that she’s done nothing else. We knew by the state’s so-called Back to Normal plan, we knew it was going to make it even a bigger challenge to maintain our course, because when one leaves the reservation and goes to, for example, Rapid City or another place like that, I heard reports back, “Hey, they ain’t wearing masks!” Like nothing’s going on.

MELINDA TUHUS: What kind of precautions are people taking on the reservation? And do people have access to masks and other things they need?

HAROLD FRAZIER: Yeah. There’s quite a bit of people wearing masks. Again, we’ve been pushing the CDC recommendations on social distancing. At the very beginning it was really, really hard to get a lot of supplies in such as masks and gloves. But now we have a pretty good supply of masks. People took it upon themselves, which is pretty awesome, they started making their own masks out of cloth, so that was really good. I believe that was a recommendation from the CDC as well; it’s better than nothing. We’ve done a lot.

Also our businesses here, we do weekly checks on them; they all have Plexiglass between the teller and the customer. We recommend – and they do follow it – 10 customers at a time in the store. And if you come to our reservation now, there’s marks on the floor where they’re measured six feet apart. Everybody stepped up and they’re all doing their part and it seems to be going real well.

MELINDA TUHUS: Have you had any cases on the reservation?

HAROLD FRAZIER: We’ve had one positive case. But, like I said, because of the checkpoints and the other actions we’re doing, we were able to isolate it quickly. It’s really fortunate that the contacts with the patient, so far the ones we have tested, come out negative, but they’re all in quarantine, and it’s doing quite well.

MELINDA TUHUS: I’ve been reading that in the U.S. as a whole, indigenous folks are contracting the virus at a higher rate than the general population, but you seem to have nipped it in the bud.

HAROLD FRAZIER: Yeah, we’re sure trying, you know. We’re prepared if we get another case or even more. We just don’t want it to get like, I don’t know if you’ve seen anything in relation to the Navajo Nation?

MELINDA TUHUS: Yes, that’s a terrible situation, very high mortality rate. So you’re not planning to change anything you’re doing because it’s working to protect people. You expect the governor will initiate legal action if you don’t remove the checkpoints?

HAROLD FRAZIER: Yeah, that’s what they’re saying, but, you know, it doesn’t matter what they do. I’m confident and everybody here, we’re prepared for whatever comes our way. 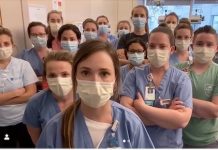 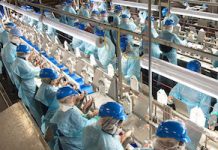 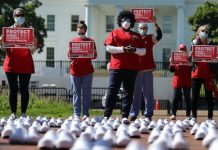