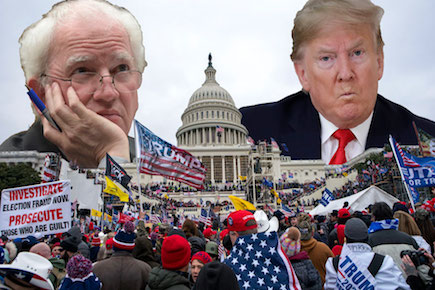 In the days between the Nov. 3, 2020 presidential election and Jan. 6, the date Congress was scheduled to certify Joe Biden as winner and next occupant of the White House, Donald Trump and his inner circle were working to subvert the will of the American people, according to a memo obtained by the Washington Post’s Bob Woodward and Robert Costa.  The plot that preceded the pro-Trump violent insurrection at the U.S. Capitol on Jan. 6, involved conservative lawyer and Trump adviser John Eastman who argued that the Constitution’s 12th Amendment gave then Vice President Mike Pence the discretion to decide which states’ electoral votes should be counted if there was a dispute.

Because GOP legislators had already been primed to make baseless allegations that widespread voter fraud had tainted the election, the plot would have several key states submit competing slates of electors, thereby throwing the election result into dispute. The 12th Amendment dictates that if no candidate achieves the necessary majority, the matter goes to the House of Representatives to be decided, where each state is given one vote. On Jan. 6, 2021 the GOP-controlled 26 state delegations, just enough to overturn the will of the people, and award the election victory to Trump.

Between The Lines’ Scott Harris spoke with best-selling author and investigative journalist Greg Palast, who’s been reporting on voter suppression for 22 years. In his recent article titled, “What Do You Call a Failed Insurrection? PRACTICE,” he explains how the same elements in the unsuccessful plot to steal the election in 2020, will likely be executed again by Trump and the GOP in the 2024 election. Palast warns that unless we can preserve democracy in this year’s 2022 midterm elections, Trump and the Republicans could very well succeed.

And it’s not one congressperson, one vote, which reflects the population of the U.S. It would be one state, one vote. So California, New York, Connecticut, each get one vote. So does Wyoming, North Dakota, South Dakota. And D.C. won’t get any vote at the moment. There’s a Republican majority of 27 states, in which case the Republican, presumably Donald Trump would win.

How does this happen? First of all, it has happened 1824. Literally right after that amendment was added to the Constitution. John Quincy Adams, who lost the popular vote and the electoral vote to Andrew Jackson, was named president under the 12th amendment by a vote of the states. Jackson so overwhelmed him four years later that he became president. But it’s happened.

When I first brought up that Trump could steal the election by the 12th amendment, I was roundly criticized as a conspiracy nut — that even Trump would not do that: Oh, “Greg Palast has finally gone off the edge!” But now we have from CNN and from Washington Post, they found the memo by John Eastman, Trump’s lawyer, which Trump then gave to Pence on Jan. 4th of last year saying, “Here’s how we use the 12th amendment to stay in power.” So I had it on the nose. Now, obviously I didn’t know about the memo. I didn’t know about the secret meeting between Trump and Pence and several of Trump’s staffers, including Mark Meadows.

They were all in on this attempt to use the 12th, but they had not prepared the ground for it. So there were several senators and several congresspeople who would not challenge the certification of the votes of any of the states. But this time they are laying the groundwork by saying — people like Cruz and others, “Democrats are stealing the vote through fraudulent voters, illegal immigrants, double voters, you know, dead voters.”

And in addition, I know it gets a little complicated here, but these guys are sharp. You should read the Eastman memo, which is also linked at GregPalast.com because under the second Article of the Constitution, not the Second Amendment — not about the gun stuff. I’m talking about the Second Article of the Constitution, it says that state legislatures, not voters — Let me repeat this, state legislatures choose the president through the Electoral College. State legislators choose the Electoral College members. And if a state has a rule that says, listen to the voters, that has nothing to do with the U.S. Constitution in which there is no right to vote anywhere in the United States Constitution — period — except for the right to vote for U.S. senator. That’s your only right to vote, is for the U.S. Senate.

SCOTT HARRIS: Well, Greg, given what you’ve laid out here and what we know occurred and may occur again, what is our best protection as a democracy against these schemes that would steal another election in 2024?

GREG PALAST: I’ll say it many times and you’ll hear from me in future broadcasts. They can’t steal all the votes all the time. I tell this to people because when you hear Greg Palast talk about vote suppression, “Why vote? They’re gonna steal it.” No, no, no, no, no. They can’t steal all the votes all the time. What happened in Georgia in January, the voters simply overwhelmed the steal. When their secretary of state told Trump in that recorded call, “I can’t find you 12,000 more votes.” Don’t think that that guy, Secretary of State Raffensperger was a great hero. He wasn’t. He found him 100,000 votes already. He already stole a 100,000 votes from people. He just couldn’t find anymore without going to prison.

So, you know, they did every trick you could imagine, but people simply went out and vote and overwhelmed it. So overwhelm the steal. Don’t steal your own vote. And then if, if the popular will prevails in 2022, they won’t have the votes in Congress. They won’t have the popular support that they will need to pull off that stunt in 2024. So now is when you act. Protect your vote and be alert. 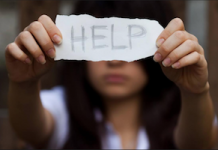 Is There a Link Between the Pandemic and Spike in Adolescent Girls’ Suicide Attempts? 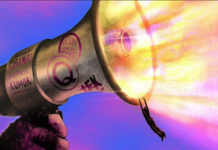 Dissecting the GOP’s ‘Big Lie’ and Other Toxic Conspiracy Theories